How Hard Can Biscotti Be?

Flipping through my moms recipe card index, I ran across a couple Biscotti recipes. The first was Anise Toast and the second was Cappuccino Chocolate Biscotti.

I have fond memories of family snacking on Anise Toast while having coffee around the kitchen table late afternoon or evening. Many many times we would be visiting my Grandmother and she would have made Italian cookies, Anise Toast or some other baked treat.  Mostly they were on the dry side and not overly sweet. They were meant to be served with hot beverages, usually coffee but you can have them with tea if that is your thing.

My grandmother seemed to always have coffee in the afternoon. At home, my mom would always have a large pot brewing. Coffee was always on. Not particularity fancy coffee by today's standard. I still have a vintage 1962 Hills Brothers coffee tin.  The tin is adorned with coffee recipes  that were tested by the "Pan American Coffee Bureau". 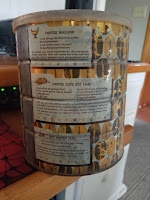 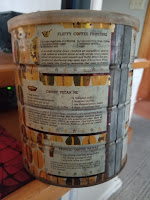 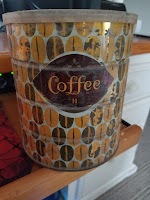 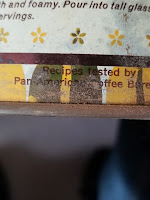 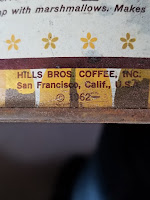 I haven't made any of the recipes on the tin. Maybe someday I will and write an article about it.

Looking though the recipe cards, neither Biscotti seems too much of a challenge. I'm sure most are pretty simple and the "dough" easy to make. My Anise cookies went quite smoothly. the dough was a bit tacky but went easily into the greased baking pan. 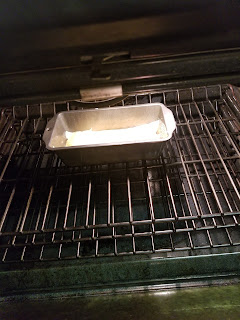 The Cappuccino were a bit more difficult.  The dough was a bit more crumbly and took some effort mushing it into a log. I did eventually get the shape and onto the silicon mat. The dough is supposed to be dry I guess. So , I know for next time not to worry. It was the way it was supposed to be. 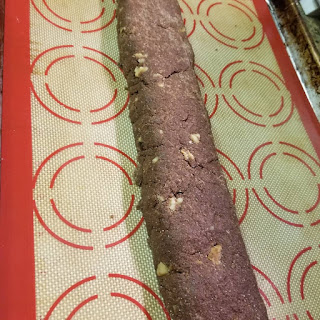 I baked both following the recipe then removed from the oven and sliced.  I then baked both sides of the Biscotti for 10 minutes on each side and moved to a cooling rack. As the baker, I get the pieces and crumbs that are left on the baking pan. All Mine!

Both came out great. I saved a few for my family but took the bulk to work where they were hungrily eaten by my coworkers for an office baking event.  I plated samples with Iced Italian Cookies and Sesame Thins I made. 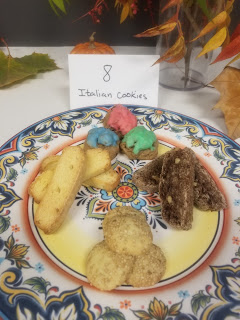 Posted by Jomebrew at 2:07 PM No comments:

Kicking off this place to share pictures and stories about my adventures in cooking and baking.

Some time ago my wife said she was impressed how I have no fear about baking and cooking from scratch. I didn't really understand what that meant but soon realized that many people fear scratch cooking.

To me, scratch cooking is just cooking. Growing up in a pretty humble household, we didn't have a lot of prepared foods and rarely went out to restaurants. So infrequent were those excursions, I fondly remember our outings.

As a kind, I spent many hours clinging to my mother while she was cooking in the kitchen. I observed hundreds of dished being cooked and though she didn't bake much, I was usually right there when she did.  We pretty much made everything from scratch. I guess my lack of fear of cooking from scratch comes from that was just the way we did it. I didn't know any better. Much like Chauncey the Gardner from the movie Being There.

Fast forward many years to my wife developing her impressive cooking skills, also mostly from scratch. My confidence in scratch cooking and baking is firmly reinforced by her inspirational cooking skills. I know I can rely on her when I don't understand why something isn't right.

Just last night when we popped the top off my Thanksgiving Chocolate Cream Pie, my wife instantly let me know my custard wasn't setup. First, what the heck is a custard? I made chocolate cream pie. Turns out the process of cooking egg yolks, sugar, milk, etc is making a custard. Well, I made one and it runeth. Tastes great but was more of a loose pudding than pie. 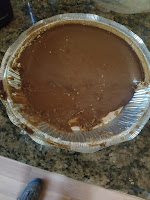 The recipe is simple, just sugar, flour, baking cocoa, salt, water, evaporated milk.  Just heat until thick and bubbly, take some out and wish with egg yolks then add back and stir while simmering until is it this and ready. Then pour it into the crust and let cool.

I guess I didn't simmer long enough or cooled too quickly. I'll figure it out next time or the time after. Or, maybe never.

On the other hand, my Bourbon Pecan Pie, based on a vintage recipe my mom wrote down on a recipe card 50 years ago, came out great. I am not a fan of Pecans but when I dry toasted them in a cast iron pan, WOW, they are fantastic. 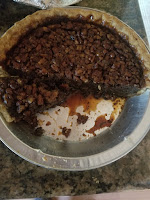 The recipe is pretty easy. The vintage recipe calls for a specific molasses. I don't know enough to know that all molasses (molassi?) is not the same. I picked one from Smart and Final and used it. Turned out great. A few days later, I made one using a vintage recipe from Karo using their light syrup and it was great too. So, for Thanksgiving, I mixed the two using Molasses and Karo Syrup, added bourbon and delightfully toasted pecans.

I'll wrap up my first article letting folks know we don't have to fear the unknown, it is just unknown to us. We'll embrace the adventure and enjoy our failures and successes.

Posted by Jomebrew at 9:11 AM No comments:

Jomebrew
I homebrew beer for fun and to share. I am a critical thinker and a technology geek. Avid Disc Golfer. Frequently Make food. Occasional Baker. Let's enjoy some beer, laughs and maybe a story or two.